The New England Delegation is honoring Tom Brady’s long-standing football career. A total of  22 seasons, 20 of which have been with the New England Patriots and 2 with the Tampa Bay Buccaneers.

Whereas, after graduating from Junipero Serra High School, Tom Brady matriculated at the University of Michigan, where he led the Wolverines football team to wins in the Citrus and Orange Bowls;

Whereas Tom Brady was drafted in the sixth round of the 2000 National Football League (referred to in this preamble as the “NFL”) Draft with the 199th pick by the New England Patriots, a selection that many football analysts now regard as the best draft pick of all time;” 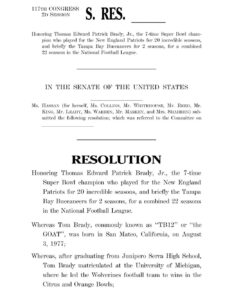